Gender Whiteness And Power In Rodeo 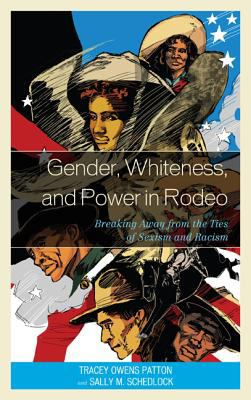 The lure of cowgirls and cowboys has hooked the American imagination with the lure of freedom and adventure since the turn of the twentieth century. The cowboy and cowgirl played in the imagination and made rodeo into a symbolic representation of the Western United States. As a sport that is emblematic of all things "Western," rodeo is a phenomenon that has since transcended into popular culture. Rodeo's attraction has even spanned oceans and lives in the imaginations of many around the world. From the modest start of this fantastic sport in open fields to celebrate the end of a long cattle drive or to settle a friendly "who's the best" bet between neighboring ranches, rodeo truly has grown into an edge-of-the-seat, money-drawing, and crowd-cheering favorite pastime. However, rodeo has diverse history that largely remains unaccounted for, unexamined, and silenced. In Gender, Whiteness and Power in Rodeo Tracey Owens Patton and Sally M. Schedlock visually explore how race, gender, and other issues of identity complicate the mythic historical narrative of the West. The authors examine the experiences of ethnic minorities, specifically Latinos, American Indians, and African Americans, and women who have continued to be marginalized in rodeo. Throughout the book, Patton and Schedlock questioned the binary divisions in rodeo that exists between women and men, and between ethnic minorities and Whites--divisions that have become naturalized in rodeo and in the mind of the general public. Using iconic visual images, along with the voices of the marginalized, Patton and Schedlock enter into the sometimes acrimonious debate of cowgirls and ethnic minorities in rodeo.

Email To A Friend

Text To A Friend